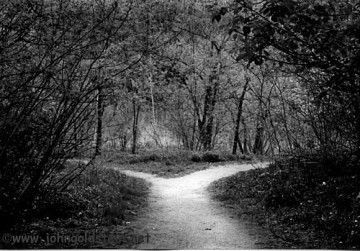 And sorry I could not travel both

And be one traveler, long I stood

And looked down one as far as I could

To where it bent in the undergrowth;

Then took the other, as just as fair,

And having perhaps the better claim,

Because it was grassy and wanted wear;

Though as for that the passing there

Had worn them really about the same,

And both that morning equally lay

In leaves no step had trodden black.

Oh, I kept the first for another day!

Yet knowing how way leads on to way,

I doubted if I should ever come back.

I shall be telling this with a sigh

Two roads diverged in a wood, and I—

I took the one less traveled by,

And that has made all the difference.

I continue to contemplate these fertile words by poet Robert Frost this week as I have been recovering from a nasty cold. When considered in today’s socio-political context of chaos, paranoia and misapprehension, it is true once again, that we are at a crossroads, you and I. And it is a crucible not unfamiliar to us, for through the ages we have been faced with many divergent roads. Some roads have been heavily trod, warn by war, oppression and conflict, while others of peace, equanimity and dignity still lay “grassy and wanting wear.” The writer of James in this Sunday’s epistle declares that we must be doers of the Word, not just hearers. Jesus constantly calls us to action rather than comfort, to radical love in his name, not a vague Christianity devoid of sacrifice or inconvenience. To follow Jesus, we must follow him down the path less travelled, even if our prosperity, our good name, and even our life itself is threatened.

This Sunday we continue down that path, together with God. See you then!

Join us for our weekly Sunday service via livestream at 10:15am.